www.reuters.com   | 18.01.2013.
LONDON (Reuters) - American singer-songwriter Bob Dylan may play a special concert in Wales to mark the centenary of the birth of Dylan Thomas, the Welsh poet after whom he may or may not have named himself. 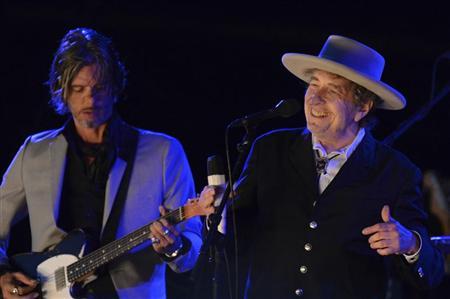 The member of parliament for West Swansea, Geraint Davies, said he had asked Dylan if he would perform in the city as part of a series of commemorative events next year.

"Bob Dylan named himself after Dylan Thomas. I have asked Bob Dylan whether he would be prepared to give a centenary concert in Swansea, in order that he could blend his music with Dylan Thomas's poetry," Davies said in the British parliament on Thursday.

"Sony Music has come back and said that Mr. Dylan is thinking very positively about the idea."

Dylan, 71, was born Robert Allen Zimmerman and the reason he picked his adopted name while a young folk singer in Minnesota has long been debated by fans.

The most popular theory is that he did indeed name himself after the Welsh poet, though another says it was after Marshal Matt Dillon in the TV Western "Gunsmoke".

Dylan Thomas, whose works include "Under Milk Wood" and "Do Not Go Gentle Into That Good Night", was born in Swansea in 1914 and died in New York 1953 after a drinking binge.