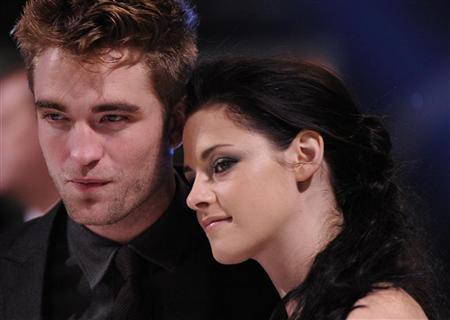 The stars of the "Twilight" vampire films easily surpassed all other film twosomes in the Forbes list that looked at the top 10 grossing romantic films of the last three years.

"There is something unique about these films in the way that people have attached themselves to them," said Dorothy Pomerantz of Forbes.com.

"The movies are unconventional, and you have the added element that the two people are a couple in real life," she added.

Stewart and Pattinson's off-screen romance and breakup following Stewart's affair with Rupert Sanders, the married director of her film "Snow White and the Huntsman," fueled interest in the couple, who reportedly reunited ahead of the release of the final film in the popular "Twilight" series based on the novels by Stephenie Meyer.

Forbes compiled the list by looking at the top-grossing romantic films in the United States in the past three years as classified by Box Office Mojo. They added the totals for each couple's U.S. box office.

Channing Tatum, who was voted People magazine's sexiest man alive in 2012, and "The Vow" co-star Rachel McAdams came in second, with the film earning $125 million domestically, as well as $71 million overseas.

Jennifer Aniston and Adam Sandler captured the No. 3 spot with "Just Go With It," which earned $103 million at the U.S. box office and double that amount after international sales were included.

Pattinson and Tatum actually made the list twice, Pattinson scoring with Reese Witherspoon for "Water for Elephants," which placed 10th, earning $59 million domestically.

And Tatum and co-star Amanda Seyfried pulled in $80 million at the U.S. box office with the sixth-ranked "Dear John," which was based on a book by Nicholas Sparks.

Two other films based on Sparks' books were among the top 10 most lucrative romantic films.