www.reuters.com   | 21.01.2013.
WASHINGTON (Reuters) - U.S. safety investigators on Sunday ruled out excess voltage as the cause of a battery fire this month on a Boeing Co 787 Dreamliner jet operated by Japan Airlines Co (JAL) and said they were expanding the probe to look at the battery's charger and the jet's auxiliary power unit. 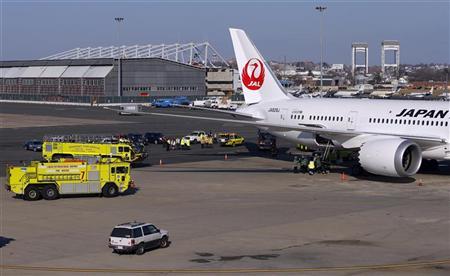 Last week, governments across the world grounded the Dreamliner while Boeing halted deliveries after a problem with a lithium-ion battery on a second 787 plane, flown by All Nippon Airways Co (ANA), forced the aircraft to make an emergency landing in western Japan.

A growing number of investigators and Boeing executives are working around the clock to determine what caused the two incidents which the U.S. Federal Aviation Administration says released flammable chemicals and could have sparked a fire in the plane's electrical compartment.

There are still no clear answers about the root cause of the battery failures, but the U.S. National Transportation Safety Board's statement eliminated one possible answer that had been raised by Japanese investigators.

It also underscored the complexity of investigating a battery system that includes manufacturers across the world, and may point to a design problem with the battery that could take longer to fix than swapping out a faulty batch of batteries.

"Examination of the flight recorder data from the JAL B-787 airplane indicates that the APU (auxiliary power unit) battery did not exceed its designed voltage of 32 volts," the NTSB said in a statement issued early Sunday.

On Friday, a Japanese safety official had told reporters that excessive electricity may have overheated the battery in the ANA-owned Dreamliner that was forced to make the emergency landing at Japan's Takamatsu airport last week.

"The NTSB wanted to set the record straight," said one source familiar with the investigation who was not authorized to speak publicly.

U.S. investigators have already examined the lithium-ion battery that powered the APU, where the battery fire started in the JAL plane, as well as several other components removed from the airplane, including wire bundles and battery management circuit boards, the NTSB statement said.

On Tuesday, investigators will convene in Tucson, Arizona to test and examine the charger for the battery, and download non-volatile memory from the APU controller, with similar tests planned at the Phoenix facility where the APUs are built. Other components have been sent for download or examination to Boeing's Seattle facility and manufacturer facilities in Japan.

Securaplane Technologies Inc, a unit of Britain's Meggitt Plc that makes the charger, said it will fully support the U.S. investigation.

Officials with United Technologies Corp, which builds the plane's auxiliary power unit and is the main supplier of electrical systems on the 787, said they would also cooperate with the investigation.

The NTSB's decision to travel to Securaplane's facility sparked fresh questions about the safety of the lithium-ion batteries that remain at the heart of the investigation.

While the 787 is the most aggressive user of lithium-ion battery technology in commercial aviation, the industry at large is testing it, and the FAA has approved its use in several different planes, each governed by "special conditions."

"Lithium-ion batteries are significantly more susceptible to internal failures that can result in self-sustaining increases in temperature and pressure," the FAA said in 2006, when it allowed Airbus to use lithium batteries for the emerging lighting system on its A380.

Securaplane, which first began working on the charger in 2004, suffered millions of dollars of damages in November 2006 after a lithium-ion battery used in testing exploded and sparked a fire that burned an administrative building to the ground.

Boeing spokesman Marc Birtel said an investigation into the 2006 fire was later determined to have been caused by an improper test set-up, not the battery design. He declined comment on the current 787 investigations.

After the fire, a former Securaplane employee named Michael Leon sued the company, alleging that he was fired for raising security concerns about charger and discrepancies between their assembly documents and the finished chargers.

The U.S. Federal Aviation Administration (FAA) on Sunday said it had investigated Leon's safety complaints in 2008 and 2009 but concluded his allegations focused on prototypes that were not ultimately used in the new lightweight airliner.

In its statement, the NTSB said French authorities were also participating in the investigation. No comment was immediately available from the French safety agency.

Japan Transport Safety Board said it was aware of the NTSB report and would consider the U.S. statement in its probe.

Kosugi said both the battery and the surrounding systems were being stored in Tokyo's Haneda Airport until authorities decided where to conduct the Japanese investigation.

Boeing said on Friday it would continue building the carbon-composite 787, but put deliveries on hold until the U.S. Federal Aviation Administration approves and implements a plan to ensure the safety of potentially flammable lithium-ion batteries.

In Washington, U.S. Transportation Secretary Ray LaHood said the 787, which has a list price of $207 million, would not fly until regulators were "1,000 percent sure" it was safe.

Japan is the biggest market so far for the 787, with ANA and JAL operating 24 of the 290-seat wide-bodied planes. Boeing has orders for almost 850 of the planes, which have the most complex electrical systems of any planes on the market.

It remains unclear if the investigations will cause other airlines -- and military aircraft builder -- to rethink their plans to use lithium-ion batteries, which are lighter and more powerful than conventional batteries.

Airbus plans to use similar batteries on its rival to the 787, the A350, which is due to make its maiden test flight in the middle of this year.

European executives said last week they would study the findings of the U.S. investigation but said their decision to move more slowly than Boeing towards electric systems, and spread the load over twice as many batteries, would reduce the risk.

Aviation Week quoted Airbus programs chief Tom Williams as saying "failure management" was key and that any escaping gases from the A350 batteries would be protected by titanium as they are expelled from the aircraft. The company has not said if it would attempt to suppress a lithium fire or focus on containing a lithium blaze, as Boeing has done.

Williams told Aviation Week that switching from lithium back to nickel cadmium would require significant engineering work with both space and weight penalties. Airbus was not immediately available to comment on the article.

Brazilian plane maker Embraer SA declined comment when asked if it planned to rethink its use of lithium-ion batteries on its military transport plane and new business jets.

The Embraer programs use a battery made in the United States, unlike the Japanese one on the 787.

Lockheed Martin Corp, maker of the F-35 Joint Strike Fighter, has said it does not see a problem since the lithium-ion batteries on the military plane are made by France's Saft Groupe, not Yuasa.