www.reuters.com   | 17.01.2013.
TOULOUSE, France (Reuters) - Europe's Airbus posted a 43 percent drop in orders and surrendered its crown as the world's largest planemaker to Boeing last year, but predicted improvements in both orders and deliveries for 2013 as airlines seek to reduce fuel costs. 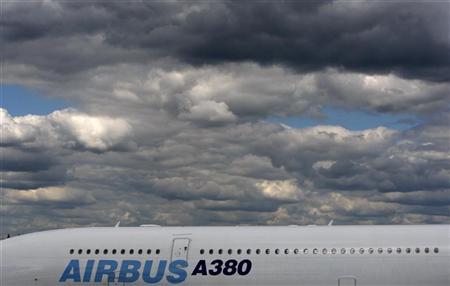 It also said it remained confident of achieving the maiden flight of its A350 carbon-composite airliner by mid-year. U.S. rival Boeing's (BA.N) new 787 Dreamliner was grounded by U.S. authorities overnight, citing a potential battery fire risk.

Airbus said it had booked 914 orders during 2012 in a year when Boeing caught up with demand for revamped medium-haul jets, selling exactly the same volume for one model alone.

Airbus had won the previous year's order race by a record margin and had been expected to draw a response as the planemakers waged a two-year contest to win orders by offering airlines significant fuel savings over earlier models.

Gross orders stood well ahead of the company's 2012 target of 650 jets but compared with Boeing's comparable figure of 1,339 new aircraft, giving Airbus a market share of 41 percent.

The figures were closely in line with estimates of more than 900 orders and a market share of 41 percent reported by Reuters after a late surge allowed Airbus to narrow the gap with Boeing.

Airbus confirmed it had delivered 588 aircraft in 2012, up 10 percent from the previous year and above target. But it was outpaced for the first time in a decade by Boeing's 601 planes.

For 2013, EADS unit Airbus set a target of more than 600 deliveries and 700 gross orders. Senior executives said they were confident they would continue to flatten out any volatility in deliveries by juggling customers and jets in the order book.

On specific models, Airbus missed its target of 30 orders for the A380 after the discovery of wing cracks a year ago shortened the life of certain parts and forced the company to come up with costly repairs. Instead, it sold nine superjumbos.

For 2013, it predicted a slowdown in A380 production to 25 aircraft as it makes the transition to a permanent solution for the wing defects, blamed on manufacturing and design flaws that were initially addressed by a temporary repair.

Airbus exceeded an informal target of 300 current-generation A320 narrowbody plane orders as it strives to ensure production will be maintained during the switch to a revamped, fuel-saving A320neo version between 2015 and 2017.

The 305 "A320ceo" orders included a last-minute deal for 60 aircraft with an unnamed Asian customer.

Executives expressed confidence in avoiding any dip in production for their best-selling model -- seen as a crucial objective as the A320 family generates cash for larger models.

Airbus, which has accused Boeing of stimulating a price war to win deals, said it was satisfied with its own pricing. Boeing has made similar remarks about its pricing. Industry sources privately say recent competition has been intense.

Airbus also backed the use of lithium-ion batteries on its future A350 passenger jet on Thursday, saying its next aircraft was designed differently from Boeing's Dreamliner. (Editing by James Regan)