﻿﻿﻿ Balloon-like dwelling to be tested on Int'l Space Station

Balloon-like dwelling to be tested on Int'l Space Station

www.reuters.com   | 17.01.2013.
LAS VEGAS (Reuters) - A low-cost space dwelling that inflates like a balloon in orbit will be tested aboard the International Space Station, opening the door for commercial leases of future free-flying outposts and deep-space astronaut habitats for NASA. 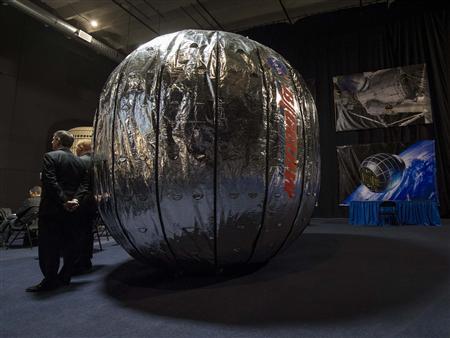 "It will be the first expandable habitat module ever constructed for human occupancy," Gold said.

A successful test flight on the space station would be a stepping stone for planned Bigelow-staffed orbiting outposts that the company plans to lease to research organizations, businesses and wealthy individuals wishing to vacation in orbit.

Bigelow has invested about $250 million in inflatable habitation modules so far. It has preliminary agreements with seven non-U.S. space and research agencies in the United Kingdom, the Netherlands, Australia, Singapore, Japan, Sweden and the United Arab Emirates.

"The value to me personally and to our company is doing a project with NASA," Robert Bigelow said. "This is our first opportunity to do that. We do have other ambitions."

NASA, which will pay Bigelow Aerospace $17.8 million for the BEAM habitat, also is interested in the technology to house crew during future expeditions beyond the space station, a $100 billion research complex that flies about 250 miles (400 km) above Earth.

"Whether you're going to the surface of the moon or even Mars, the benefits of expandable habitats are critical for any exploration mission," Gold said.

The lightweight, soft-skinned inflatable, made of materials similar to Kevlar, has several advantages over traditional metallic space dwellings. BEAM, for example, weighs about 3,000 pounds (1 ,361 kg), less than a third of traditional, similarly sized space modules, so it can be launched for a fraction of the cost.

It also offers a potentially safer radiation environment than metal structures, which can produce body-piercing secondary heavy particles during solar storms and other cosmic radiation events.

The U.S. space agency studied inflatable space habitats for humans in the 1990s under a NASA program called TransHab. The tests included blasting a model structure with bullet-like projectiles to see how well it would withstand micro meteoroid and orbital debris hits. The material proved space-worthy, though budget and political issues prompted the project's cancellation in 2000.

Bigelow later licensed the technology from NASA and spent millions of dollars more to develop it.

"It's one of our classical roles to advance technology so the private sector can utilize it. In this case, we're going to be able to benefit from it again," said NASA deputy administrator Lori Garver.

BEAM will be attached to the station's Tranquility connecting node and inflated with pressurized air to form a rigid, cylinder-shaped, balloon-like dwelling.

Garver said there are no firm plans for what the station's six live-aboard crew members will do with their spare room.

Initially, NASA and Bigelow are interested in getting information about how the structure withstands radiation and maintains a stable temperature in orbit, and also whether the fabric mildews or becomes a place where contaminants in the station's air collects.

Beyond the test flight, Bigelow's commercial business is dependent on the development of space taxis to fly company personnel and guests into orbit. NASA likewise is looking to the private sector to fly its astronauts to and from the space station, a service now solely provided by Russia at a cost of more than $60 million per person.

NASA is investing in three companies - Boeing Co (BA.N), Space Exploration Technologies, also known as SpaceX, and Sierra Nevada Corp - in hopes of having at least one space transportation system ready to fly before the end of 2017. The space station, a project of 15 nations, currently is funded through 2020.

Bigelow has agreements with Boeing and SpaceX for launch services, if and when they become available. SpaceX plans a test launch with company astronauts before the end of 2015, and Boeing's first piloted flight is pegged for 2016. (Editing by Tom Brown, Dan Grebler, Kevin Gray and David Gregorio)