www.reuters.com   | 20.01.2013.
LONDON (Reuters) - The soundtrack of the Oscar-nominated movie "Les Miserables" climbed to the top spot in the UK albums chart, the first film cast recording to do so since Madonna's "Evita" in 1997, the Official Charts Company said on Sunday. 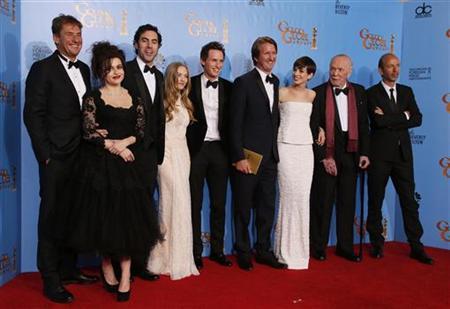 A film version of a hugely successful stage musical based on a novel by 19th century French writer Victor Hugo, "Les Miserables" has already picked up a Golden Globe award for best movie musical, and is nominated for a best picture Oscar.

The recording of songs performed by the actors in the movie, including Anne Hathaway, Russell Crowe and Hugh Jackman, had entered the UK albums chart in fifth position a week ago. It knocked Emeli Sande's "Our Version Of Events" off the top spot.

Hathaway, who plays a character called Fantine, also had the 22nd spot in the singles chart with her performance of "I Dreamed A Dream", one of the most popular songs from the musical.

At the very top of the singles chart, U.S. producer will.i.am's collaboration with Britney Spears, "Scream & Shout", held onto the number one ranking, fending off stiff competition from new entrants 50 Cent and Justin Timberlake.