www.reuters.com   | 20.01.2013.
PHOENIX (Reuters) - An Arizona man with a special fondness for caped crusader Batman and his sidekick Robin bought the original Batmobile driven in the iconic television series with a bid of $4.2 million at an auction on Saturday. 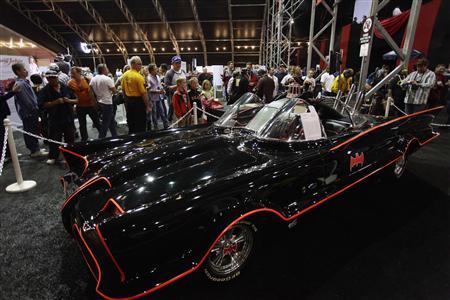 Rick Champagne, a Phoenix-area logistics company owner, came away with the black, futuristic two-seater featured in the "Batman" series starring Adam West and Burt Ward from 1966 to 1968, following a flurry of spirited bidding at the Scottsdale, Arizona, auction.

"I really liked Batman growing up and I came here with the intention of buying the car," Champagne, 56, told Reuters in a brief interview moments after he bought the car. "Sure enough, I was able to buy it. That was a dream come true."

The Barrett-Jackson auction was the first time the car was put up for public sale. In addition to the $4.2 million bid price, the buyer will have to pay an additional roughly $420,000 in premiums.

The Batmobile is based on a 1955 Lincoln Futura, a concept car built in Italy by the Ford Motor Co.

In 1965, the concept car was bought for a nominal $1 by noted customizer George Barris, who had a mere 15 days and $15,000 to transform the vehicle for the show. He has owned it ever since.

Barris told Reuters he had supplied vehicles for movies and television shows before, but this one had to be markedly different than the others.

"With every pow, bang, wow, wee, I wanted the car to do something just like the actors," said Barris, 87, in an interview before the auction. "The car had to be a star on its own. And it became one."

The car has a V-8 engine and instruments in the steering wheel, plus innovative items like a push-button transmission.

But generations may remember it best for Bat gadgets added for the series, including a car phone and the ability to deploy such things as oil, smoke and nails to thwart villains - not to mention twin rear parachutes for quick Bat turns.

Barris said the vehicle toured the country after the series and a movie and then was housed in a private showroom in California. He said it was time to part with the popular car and let a new owner have the Bat keys.