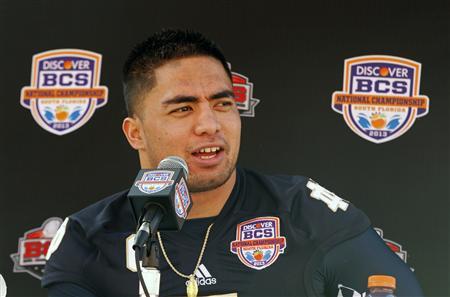 The interview will be his first on camera since news broke last week that his story about his girlfriend's cancer death - and her existence altogether - was exposed as a fraud.

The tragic story of his girlfriend and her injuries from a car accident and death from leukemia was one of the most widely recounted U.S. sports stories last year as Notre Dame made a drive toward the college football national championship game.

Te'o has denied being in on the elaborate hoax, telling ESPN on Friday he had believed his relationship was real with a woman who turned out to be an online fabrication.

Te'o and his parents, Brian and Ottilia Te'o, will appear in an interview on "Katie" to be broadcast on Thursday, January 24, ABC said.

"I wasn't faking it," Te'o said in the off-camera ESPN interview, excerpts of which were posted on ESPN.com. "I wasn't part of this."

The ESPN interview was Te'o's first since the sports blog Deadspin.com on Wednesday exposed the tale of his girlfriend, Lennay Kekua, and her death as a hoax and that a friend of Te'o's named Ronaiah Tuiasosopo was behind it.

Te'o acknowledged in a statement on Wednesday and the ESPN interview that he had never met the woman in person, although he considered her to be his girlfriend, and said he had been duped.

Notre Dame, one of the most powerful institutions in U.S. collegiate athletics, held a news conference within hours of the Deadspin.com article to say that Te'o had been duped.